The first episode, titled “The Spoils of War,” opens on a quiet tropical planet apparently untroubled by imperial interest. The calm turns out to be temporary, as Wrecker, Hunter and Echo (all voted off The Clone Wars alum Dee Bradley Baker) burst out of a beach grove with a swarm of agitated crab aliens snapping at their heels. With help from fellow Bad Batch clones Tech (also Baker) and Omega (Neighbours‘ Michelle Ang), the crew escape the bewildering hordes of what-thems and head back to their information broker, Cid (Cheers‘ Rhea Perlman) on Ord Mantell.

Upon their arrival at Cid’s Parlour, Bad Batch meets Phee Genoa (Wanda Sykes), whom Cid refers to as “the most reliable pirate I know.” An oxymoronic statement if we ever heard one.

Cid informs them that Count Dooku’s empty palace on Serrano has goodies worth swiping and tells them to see what they can get. Everyone else is wild, but Hunter is reluctant. He points out that they would basically give themselves to the Empire. But the reward Cid promises is tempting: “You really want to be free? Then pull off this heist and you’ll have the means to disappear. No more risky missions. No more living hand-to-mouth. You can have a future.”

Hunter relents, and the next scene sees Bad Batch making his way to Serrano. They reach the planet without incident, but seizing Dooku’s war chest proves more complicated. Imperial forces are already all over the place; cargo ships crammed with crates have parked around Dooku’s abandoned abode, and many stormtroopers keep watch over the operation.

See also  What's new on Disney Plus this month: "She-Hulk: Attorney At Law," "Andor" and more

Wrecker, Omega, Echo and Tech sneak aboard one of the cargo ships while Hunter destroys several enemy ships as a diversion. The plan is working. In a way. His distraction draws the attention of the soldiers, but the jumping grunts take the irritatingly frenetic measure to shut everything down. This means that Omega, Echo and Tech are trapped inside one of the ships while Wrecker (who managed to steal one of the crates before the diversion) regroups with Hunter in a nearby forest.

Omega and the others try to escape, but the ship takes off before any progress can be made. Hunter and Wrecker are unsuccessful in their attempt to hitch a ride on the ship and find themselves holding off a wave of troopers. The fight takes them to Dooku’s old plan room (fans will recognize it when they see it) while Omega and company run into another problem. Deducing that intruders are aboard the cargo ship, the troops eject the escape pods to make escape impossible. Luckily for them, Omega has been studying spacecraft and suggests they dive into one of the crates.

The plan works, and they soon hurtle toward the ground in a box that shows no sign of slowing down. The first episode goes black… 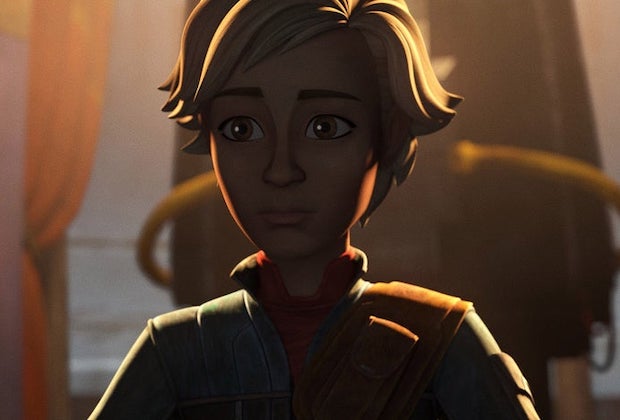 This segues nicely into episode 2, “Ruins of War,” which immediately addresses Bad Batch’s predicament. Hunter and Wrecker are still dodging troops on their way out of Dooku’s palace while Omega and the others are rescued by the container’s external thrusters. They land in the Serrano mountains. Tech suffers a pelvic injury during the descent, and the case teeters on the edge of a cliff.

Hunter and Wrecker escape Dooku’s palace and take cover in nearby city ruins, but stormtroopers led by Captain Wilco quickly set up a perimeter and call in air support.

Omega, Tech and Echo escape the container and encounter an old man named Romar, who was displaced by Dooku’s greed. As Wilco’s forces search for them, Hunter and Wrecker end up on abandoned Separatist war tanks and continue blasting their way to (relative) safety. They eventually commandeer a ship and go to help their friends.

Believing they can still salvage the mission, Omega takes off with one of Romar’s repelling cables and descends the cliff to reach the crate containing the war chest. Echo follows her and is soon harassed by speeding troopers sent to inspect the crash site. An injured Tech shows up to keep the soldiers busy while Echo looks for Omega in the crate.

Echo finds Omega, but as they try to drag the treasure out of the container, the jewels spill and fall just out of reach. Echo tells her to leave the war chest and prioritize their safety, but Omega doesn’t listen. She confesses that she overheard an earlier conversation between Echo and Hunter in which the former pointed out that they are all on the run because of her.

At the top of the cliff, Romar gives Tech a much-needed assist and throws a rope over the edge to help Echo and Omega. The Troopers continue to attack from all sides, but Tech’s quick thinking takes out most of them. Echo, after convincing Omega to let the war chest go, follows her up Romar’s rope. Tech fights several troopers and Romar finishes dragging Echo and Omega to safety. Hunter and Wrecker arrive on their ship, the Marauder, and after saying goodbye to Romar, the Bad Batch leave Serrano.

Safe aboard the Marauder, Bad Batch decompresses. Omega apologizes to Echo for losing the war chest, but he tells her that they made the right choice to save her and that he would do it again if he had to.

The final scene sees Vice Admiral Rampart (Noshir Dalal) visit Serrano shortly after the failed heist. Remember that at the end of the first season, Rampart oversaw the destruction of Tipoca City on Kamino. Now he assumes the Bad Batch is out of the picture. Captain Wilco informs him that they are alive, but Rampart orders him to falsify the report to avoid a conflicting narrative. When Wilco refuses, Rampart kills him…

What was on your mind Bad batch Season 2’s opening salvo?